When one mentions Polynesia, the image of paradise-like resort destinations immediately come to the mind for most travelers. The Islands of Tahiti  represents a huge geographical area known as the Polynesian triangle. This area stretches from Hawaii in the north, Easter Island in the east, to New Zealand in the southwest. The Islands of Tahiti, and more precisely the island of Raiatea formerly called Hava’i, and located at the very center of the Polynesian triangle, is known as the birthplace of much of the Polynesian culture… And tattoos and pāreu are some of the iconic traditions that originated from these beautiful islands.

The art of tattooing has been practiced throughout The Islands of Tahiti for centuries.

The origin of the word ‘tattoo’ comes from the Tahitian word ‘tātau’.

We find traces of practices that involve indelebly staining patterns into human skin with ink in extremely ancient and diverse people, from the Neolithics and onwards. That said, tattoos reached an unparalleled scale within the Polynesian Triangle.
In the ancient Polynesian society, more than a body ornament, tattoos were providing precious information on one’s genealogy and/or rank in society. It was a sign of wealth, of strength and of the ability to endure pain. Tattooing was generally begun at adolescence, and would often need years to be completed.

In the 19th century with the arrival of Europeans, considered to be a sinful glorification of the skin, tattoo was once labelled as being dangerous and  this form of art almost disappeared. Fortunately the art of tattooing was well documented and it is only at the end of the 20th century that tattooing has enjoyed a renaissance. Today, Polynesian tattoo has again gained recognition as a highly respected art form and is sought by travelers from all over the world.

The meaning behind polynesian Tattoos 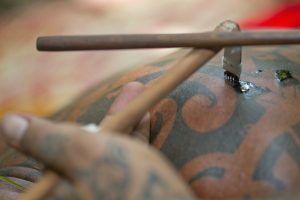 There were symbols specific to certain families and symbols unique to various roles. For example, the tattoos of warriors would incorporate symbols different from those of fishermen. Today, Polynesian tattoos are still full of symbolism, and each symbol takes on personal meaning. There are motifs that represent the sea, the land, the fertility, the stability, the travel etc.  The turtle for example is associated with several meanings such as health, fertility, longevity in life, peace, Dolphin is associated with wisdom and Tiki symbolizes protection.

Thanks to its beauty and symbolism, the art of polynesian tattoo has survived the ages brilliantly.Techniques has been modernized and perfected, while preserving the ancestral expertise. And still today, the Polynesian tattoo remains above all on a tradition full of meaning. A real immersion into the polynesian culture.

To discover more about Polynesian Tattoo:

Dressed with a smile and a pāreu, this is how the Polynesian women who met Paul Gauguin’s were immortalized.

Originally, this accessory was made from beaten tree bark and was called “tapa”. When Europeans introduced weaving to Polynesia, this accessory took the name of “pāreu“, the Tahitian name from which the word “pareo” was derived. Initially worn by both men and women, the pāreu was used as a pagne by men, while the women used more elaborate knotting to cover their bodies.

It was the famous French painter Paul Gauguin’s portraits of vahines (polynesian’s women) that made this colourful fabric known in the West. The first pāreu were imported in the 1930s and became popular as beachwear.

It has since become an essential beach accessory worldwide and is also a truly indispensable element in the practice of Tahitian dance. It complements the rolling of the hips and emphasizes the movement of the body. It provides amplitude and highlights beautifully a nice “fa’arapu”.

The fame of the pāreu goes far beyond the borders of The Islands of Tahiti: it can be found today throughout the South Pacific, from the Fiji Islands to Rapa Nui (Easter Island).

When visiting TIOT, make sure to discover the diversity of patterns and colors offered. Many of the pāreu are still hand-painted and this is an absolute must-have to bring back in your suitcases for all the beach enthusiasts!