The beauty of its landscapes, the authenticity of its culture, The Islands of Tahiti, or the Polynesian dream

The Islands of Tahiti, with Bora-Bora as the most well-known of its islands, is a very popular travel. destination for its beautiful landscape and the authenticity of its culture. The originality of these islands relates to the privileged type of hotel infrastructure.

Symbols of exoticism, romanticism, and an absolute dream for thousands of travelers, the overwater bungalows, which offer the now well-known formula of room with “feet in the water” have become almost unavoidable to enjoy all that the destination has to offer. This type of stay offers immediate proximity to the lagoon, the freedom of independent accommodation, the splendor of the views, the turquoise graded waters, and the starry skies… 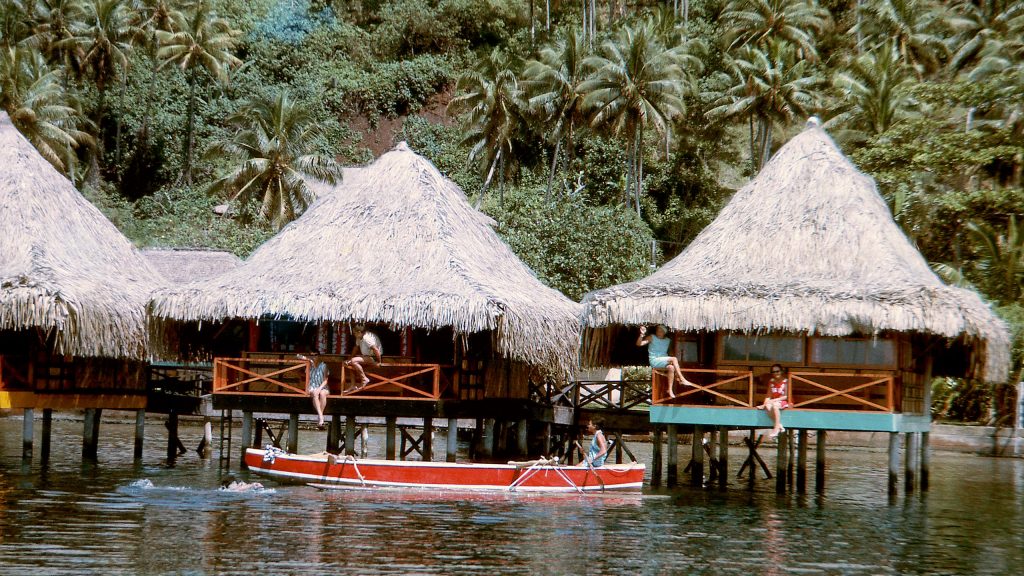 1967, the first three bungalows of the Bali Hai hotel (Island of Raiatea)
© Hugh_Kelley

A look back at the history of an icon that still makes people dream.

While you would think that this style of accommodation has existed for centuries, and certainly many cultures still reside in floating houses, did you know that this was only in the 1960’s, more precisely in 1967, that The Islands of Tahiti became the first destination in the world to offer overwater accommodation, in the purest Polynesian tradition? These houses, with thatched roofs made of dried pandanus leaves built on coconut trunk pillars, have become the symbol of the most exclusive vacations on the planet. They have since inspired other destinations, but from Raiatea to Moorea, Tikehau, or Taha’a, not to forget the majestic Bora-Bora, the magic remains alive.

Back in 1967, three Californians, Hugh Kelley, Muk McCallum, and Jay Carlisle, later known as the “Bali Hai Boys”, came to the heart of the South Pacific and built their very first hotel in the island of Moorea, surrounded by its generous nature, its beautiful beaches, and its superb diving spots. Then, they decided to build a second hotel on the island of Raiatea in a totally different environment. With no beaches or sand, to satisfy the travelers they developed an idea that would profoundly transform tourism in The Islands of Tahiti: why not allow direct access to the lagoon and observe marine life from a room built above the water. The overwater bungalow was thus born.

From Marlon Brando to Dicaprio not to forget Lady Gaga or Kim Kardashian… The allure of The Islands of Tahiti has kept attracting celebrities around the world.

With calm lagoons, powder-white sands, and aquamarine waters, the South Pacific is an ideal location for these luxury hotel rooms on stilts. Next time you find yourself in The Islands of Tahiti consider staying in one of the overwater bungalows. It will be an experience that will stay with you for the rest of your life.